Since we leave for Rome today to pick up our 80 pilgrims for a pilgrimage through Italy, Greece and Turkey, I thought I would post this article so you can see some of the churches we will visit.

Here is the portion of the article in which I contributed. Teresa Tomeo also shares her favorite churches.

With Mother’s Day approaching, San Agostino, or St. Augustine, is a great place to visit, says Steve Ray, a tour guide whose company, The Footprints of God, leads frequent pilgrimages to Rome.

The church pays tribute to St. Augustine and houses the remains of his mother, who famously prayed for his conversion to Christianity for more than 30 years. There’s a statue inside of Mary with the Baby Jesus, and women experiencing difficult pregnancies often come to pray. (Ray attributes this to the healthy birth of one of his grandchildren.) The church also houses famous paintings by Raffaello and Caravaggio… 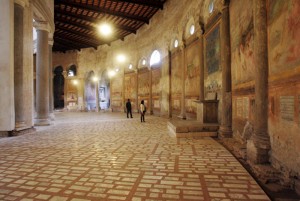 St. Stephen’s in the Round is dedicated to Christian martyrs, including those who died in the gladiator games at the nearby Colosseum. “It’s very special, because most of the churches in Rome are not round,” says Ray.

Dating from the 5th century, the inner sanctum is filled with graphic oil paintings that depict many of the gruesome tortures endured by martyrs. It may not be the best place to take young children, but Ray says it’s a popular spot for weddings. St. Stephen, considered the first Christian martyr, is buried here, and it is believed that the Roman emperor Nero feasted at the site. “The church’s modest exterior and its off-the-beaten path location make it one pilgrims might consider skipping,” says Nowell. “But by doing so, they will miss a truly unforgettable experience.”