After eight days of intense touring of Germany and following all the sites of Martin Luther and the “Protestant Devolution” we finally said our goodbyes, shared our comments about the trip and headed home.

But the trip was not only about Martin Luther and the Protestant rebellion. We also explored and toured the life of Saint Elizabeth of Hungary, understood World War II, the Nazi and Soviet Communist eras, the divided Berlin and the suffering of the people behind the Iron Curtain.

The trip was also kind of like EWTN’s show The Journey Home with lots of conversion and vocation stories along the way including our local guide Klara who was an atheist in Czechoslovakia and has recently become a Catholic.

But it was also a beautiful tour of Germany which is full of history, rustic castles, idyllic rivers and villages, old churches and excellent food and drink.

We learned a lot and even though I knew much about Martin Luther and the whole Protestant situation I think I doubled my knowledge by visiting all the sites and sharing the information among the group and especially with Ken Hensley’s excellent teaching.

For those who want to learn more about Martin Luther, John Calvin and the whole Protestant revolt visit www.kennethhensley.com.

More than half of the people on this trip it traveled with us before and again we bonded into a very close group of friends. There was no wrangling or discontentment among the group at all. It was smooth and harmonious and full of personal and spiritual growth and development.

Everyone’s faith was deepened in the conviction that the Catholic Church contains the fullness of the truth and is, in fact, the church that Jesus founded 2000 years ago and that Martin Luther introduced a great rupture into that unity which has brought chaos into the modern Western world.

We especially enjoyed celebrating Mass with these holy priests in cities that have become radically Lutheran. We again proclaimed the truth of the Catholic faith in the cities that have been deprived in many ways through their protest and separation from the unity of the one, holy, Catholic and apostolic church.

I think we were the only Catholic group to take a trip like this on the 500 anniversary of the “Protestant Reformation”. I’m certainly glad that we planned and executed this trip and it was a marvelous experience for all of us.  We expect to do this trip again in about five years.

The 500th Anniversary  of the Protestant Schism is upon us. Protestants are celebrating 500 years from Martin Luther nailing his 95 Thesis on the Wittenburg Church door. His actions divided Christendom and caused untold problems. Protestants of course consider this revolt as the restoration of the biblical Christianity and salvation by “faith alone.”

Steve and Janet Ray, in conjunction with Lutheran scholar Ken Hensley of Coming Home Network and Fr. Steven Thomlison from Lincoln NE (convert from Lutheranism), led a tour through Germany – following Martin Luther and his schism with the Catholic Church. We visited all the primary locations of the Reformation: Luther’s hometown, Wittenburg where he nailed his 95 Thesis, the tower where he translated his copy of the Bible, Marburg to the castle where the Reformers argued and left in disaccord.

Not only did we study Luther and the problems of the Reformation, but we also enjoyed the beauty and culture of Germany. Great food and wine (and German beer!), a river dinner cruise, famous ancient biblical archaeology in Berlin Museum, touring the famous sites such as Brandenburg Gate, Checkpoint Charlie and much more.

Catholics should be prepared to understand Martin Luther and the schism that he started. This was more than just a tour, it was also a seminar on the differences and similarities with our Protestant brothers and sisters. With a view to dialog and understanding, this seminar tour helped us work with ecumenical zeal to heal the wounds and separations in the Church. 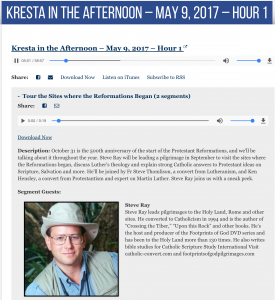 This was a fun and informative interview as an introduction to this 500th Anniversary of the Luther’s actions which started the Protestant Reformation (or Deformation, depending on how you look at it).

Click this LINK, then click on the + sign for Hour One and move the slider to 8:20 where the interview begins. It is entitled “Tour the Sites Where the Reformation Began.”