Saturday: Walking in the Rain 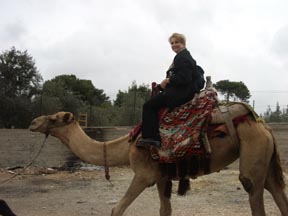 Rain and walking—brought in a little suffering to make it really feel like a pilgrimage. Umbrellas popped up as we got off the bus at the Chapel of the Ascension where the feet of Jesus left the earth to ascend into the cloud. Why a cloud? Because a cloud represents the glory of God and Jesus was returning back to the glory of heaven. Also because Daniel talked about this in Daniel 7:13-14.

We then walked a few yards to the Mount of Olives Bazaar where every one did their last shopping—but mostly where everyone got to ride the camel. Fun and pictures were had by all.

Since it was raining pretty hard we drove the bus down the Mount of Olives to Gethsemane. We saw the 2,000 year old olive trees in the Garden and prayed in the Church of All Nations which is also called the Church of the Agony. It was here that Jesus took upon himself the weight of the sins of the world. 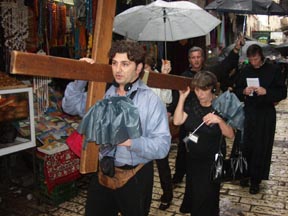 There was a Mass in the Grotto of the Arrest so we descended into the Tomb of Mary next door. Mary fell asleep in the Dormitian, was buried in this tomb and was later assumed into heaven. No city or church has ever claimed to have the bones of Mary as they do with all the other saints.

We then prayed at the Western Wall inside the Dung Gate and then lunch at the Notre Dame Center. WE had an extra hour before we could gain entrance to the Church of St. Ann for Mass so we toured the very-well-done Shroud Exhibit at the Notre Dame.

St. Ann’s Church is just inside St. Stephen’s Gate in the Old City and it is build in front of the Pools of Bethesda (John 5) and right over the grotto where Mary was born. We sang here because the acoustics are marvelous—“Immaculate Mary, your praises we sing!” We had Mass inside the monastery since the church was so full and we were on a tight schedule. I gave a short history and biblical talk about the Pools of Bethsaida. 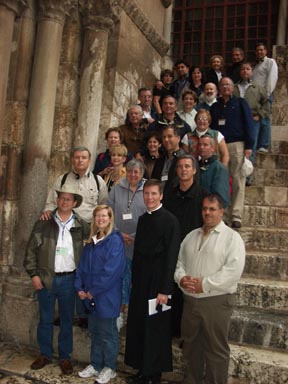 We then began the Stations of the Cross—the Way of Sorrows—the Via Dolorosa. We carried the cross through the crowded, noisy and rainy streets following the way of Our Lord. This is always a highpoint of the pilgrimage, especially as we recall the Passion of the Christ by Mel Gibson.

We entered the Church of the Holy Sepulchre which was packed with people from all over the world. I had to be a bit pushy and act as a demanding shepherd to get our group into line and protect the line so that our pilgrims had time to visit and pray inside the tomb. People always ttry to cut in front of get their groups in first.

The Latin Catholics (Franciscans) had their processions and prayers followed by the Armenian seminarians. Beautiful singing and wonderful experience. Everyone entered the tomb and then we went to an authentic Arabic dinner and the Philadelphia where US presidents have eaten in the past.

After this the pilgrims packed and left for the airport.. They were exhausted, but this was a wonderful pilgrimage that we pray will effect their lives helping them to understand and defend their faith and to bring them to sainthood.