Thursday: Driving South but UP to Jerusalem 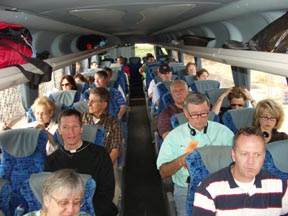 Tears in the eyes and uttered expressions of deep faith were our daily companions. The initial fear of entering Israel was soon replaced with calm and joy and enthusiasm. From our conversations and sharing along the way, it was overwhelmingly apparent that these pilgrims were deeply moved and these Legatus pilgrims had an experience of a lifetime. 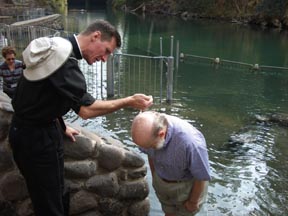 After a good breakfast at the Rimonim Hotel in Tiberias we boarded the bus for the long trip from Galilee south – to go UP to Jerusalem. Remember that no matter where you come from you always go UP to Jerusalem—even when you are coming from the north to Jerusalem. The phrase “up to Jerusalem” is used over 20 times in the Bible. 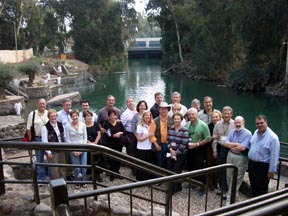 Along the 2 hour drive there is a lot to see.

We always drive through the Jordan Valley along the river. On our right is the Palestinian West Bank and on the left are the mountains of Jordan. It is hot and desert looking area but full of biblical history. We always see camels, sheep and Bedouin tribes, especially as we get closer to Jerusalem in the Judean Wilderness.  We see the Dead Sea, Jericho, Bethany along the way.

I always remind people to remember that the Holy Family walked all this way at least twice a year. They were a tough family!! 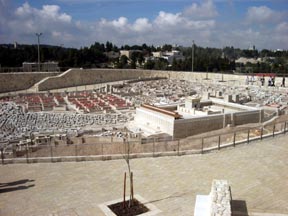 Upon entering Jerusalem, we went to the Israel Museum where we spent time at the ½ acre Jerusalem Model—an exact replica of the city of Jerusalem during the time of Christ. We walked around and explained the history of the Bible as it pertained to the 2nd Temple Period city of Jerusalem. 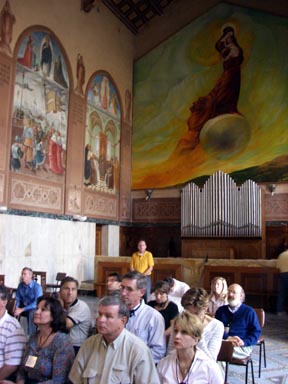 We then visited the Shrine of the Book which is devoted to the Dead Sea Scrolls.

Lunch then on to the Promenade which is one of the best views of Jerusalem from a lookout point. I explained everything we would see and the places we would be walking over the next few days.

Then on to Ein Kerem where Mary walked for many days to visit Elizabeth and where John the Baptist was born. Then we drove to the newly renovated and elegant Inbal Hotel. However, after several discussions, Legatus has agreed to use the Christian pilgrim center in the future—the Notre Dame Center.